I got the idea of using Maslow's hierarchy of needs after a random dinner party conversation with Bay Area hotelier Chip Conley, who's excellent book describes how he used this framework to help his customers, employees and investors further up the pyramid. This made sense, echoing Clayton Christensen's formative business school mantra of not looking at an industry through the lens of existing product categories, but thinking through what jobs users want to get done. If further evidence was needed, the brutal hammering that my alma mater Nokia has received in the markets is (among other things) a harsh lesson in deviating from a user-centric perspective (simplest UI, best battery life) to a technology-centric one in which decisions are made based on the parameters of an aging platform technology. (That discussion is a longer one for another time and place.)

These eight categories - the longevity octet if you like - capture the main areas of user need that have emerged after speaking with a number of older people, caregivers, academic researchers, VCs and some industry pundits. The only thing I can say for sure is that it's i) not accurate or comprehensive, and ii) will change. 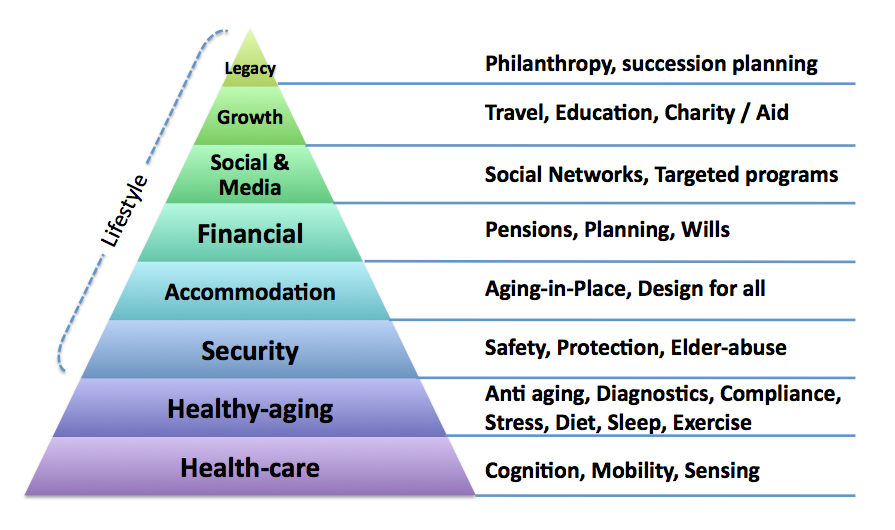 For simplicity, I've assumed that the user perspective is a combination the individual themselves, and their caregiver. So, at the high level, there seem to be three major categories - healthcare, healthy-aging and lifestyle.

HEALTHCARE is relatively easy to define - it's reactive, and is about fixing the problem. It's also the most fundamental human need, so at the bottom of the pyramid. I was speaking recently with Tom Rando, a professor at Stanford and the head of the new Biology of Aging lab there, and he suggested that this category be comprised of three focus areas that cover the majority of senior-related medical issues: Cognition, Mobility, and Sensing. I'll outline the key elements of each briefly and refer to a number of interesting early stage firms active in these areas. When I have more time I'll do a deep dive on each one and include some of the public stocks that fit with each.

Cognition (or in terms of disease, dementia) is a massively growing problem. Current estimates suggest that 36m globally have Alzheimer's globally today (the largest dementia disease), rising to 66m by 2030 as populations around the world age. Already the estimated global cost is $600bn, and costs to the US alone could rise to $2trillion by 2020. Cognition can be broken down into three areas - prevention & diagnosis, treatment and quality of life. In terms of prevention, a number of promising fitness programs have emerged - Posit Science was one of the first, raising $8m a few years ago, and now Lumosity has just raised a $32.5m C-round - one of the biggest VC investments in the space to date, and there are a number of smaller players. Sharpbrains does a good job at covering this space. Also in the prevention and diagnosis sub-category new biomarkers may detect disease early. Regarding treatment, new Alzheimer’s targets are likely in a number of areas, for example in tau-protein research. For the dementia research project I'm involved with, our scientists have taken the patient's skin cells and turned them, via induced pluripotent stem cells, into his neurons (in a petri dish) which can then be easily used to test potential drugs. Innovative non-pharmaceutical approaches (such as CoroHealth's music based therapy) have delivered powerful results in early trials, and other engagingly simple solutions such as jigsaw puzzles that can stimulate memories.Regarding quality of life, newly capable mobile and sensor platforms enable better tracking and fall prevention solutions.

Mobility has three subsegments - transport, robotics and tissue regeneration. Getting around is an increasing problem (and another benefit of Europe's love of public transport, but I digress). The Bay Area's SilverRide delivers a high-touch, high quality service aiming at this target group, and as Uber is proving, there's a demand for high quality transport. A number of robotics companies are emerging to help people walk again. I was recently the judge of a business plan competition in which we awarded the prize to Cadence Biomedical, for their low-cost assisted exoskeleton. Other more high tech options include eLegs, ReWalk, Rex and of course anything by Dean Kamen. And in terms of biological rather than engineering breakthroughs, hardly a week goes past without some astonishing stem cell-related breakthrough that will soon make it commonplace to repair damaged muscles.

Sensing, as described by Prof Rando, is generally about sight and sound, with taste, touch and smell not being in the same category of importance. I need to learn more about these areas, but for now, look for progress in biomarkers and potential cures for age-related macular degeneration, and new implantable hearing devices.

HEALTHY AGING is - unlike healthcare  today - proactive. It's about making sure that healthy people don't get any  number of the above problems. I include anti-aging in this category, as well as the traditional non-pharma prescriptions that we're often told - sleep, stress, exerice and diet. Lots here from the quantified self camp, around such things as sleep tracking (I'm an avid Zeo user), and many mood managers. I added two other topics that seem to fit here - diagnostics (being able to tell ahead of time whether someone had a disease) and compliance (ways to ensure that the patient is taking their medications). Interesting, some of the smart pill reminder services have been around for a while, but haven't gotten much traction - there's even an ePill portal that is proudly celebrating its tenth anniversary. I suspect this might have something to do with the solutions being vague about their data collection - can Mr X's compliance data be subpoenaed allowing his insurance company to stop paying for treatment if he has a bad compliance record?

The remaining six areas, I've collected under the category of LIFESTYLE.

Security - or elder abuse - it seems that financial abuse in particular is a real issue for many elders. I don't know much about this topic, but there seems to be some momentum building.

Accommodation / housing includes many of the rich and varied discussions around aging-in-place make this one of the most discussed and mature topics. I've not really tried to break this down into subcategories, hopefully I'll get help from some of these experts. Key point here is that over 80% of the elderly would prefer to stay in their home rather than move, creating all sorts of physical and technical adjustments to be made. I include here also the more general design issues. Companies like Oxo, Apple (yes, even if they don't admit it), and Omhu understand that you can actually make objects that work for people with visual and physical limitations and are also beautiful.

Financial issues are a great concern, and even though there is some overlap with the security point, this warrants a discussion of its own - various surveys recently point to reduce income and greater concern about finances for boomers and seniors. First Republic Bank is doing a great job in providing high touch services to its older clients - an executive who spoke at an event recently told how they hired Stanford University students as interns to go round to the homes of elderly potential clients and help them switch their online banking accounts from their competitors.

Social & Media can span from repurposed consumer technology such as Skype through the TV, to new dating sites for seniors to offline social communities. Look for targeted programming for the older market, who still prefer to use TVs rather than computers. The Nintendo Wii proved an unlikely hit in this segment because of its intuitive design - look for new services to emerge in particular for the controller-less Kinect, which has just opened up an API.

Growth covers travel, education and charity. 80% of luxury travel spending is by the over 50s, and the boomers are expected to continue their mind-expanding quest with educational courses. I need more information and examples on this opportunity.

Legacy - the final topic, covers both the grand gestures - how will I be remembered, but also the more mundane issues of making sure that everything is in order for the next generation. AfterSteps, set up by some current HBS students, does a good job in discussing the topic that people generally avoid, and is looking to become a brand in that lifestage, much like The Knot has become for weddings.

As you can see, most of my interest so far has been on the healthcare side, especially cognition, however I'll continue to look out for innovative examples across the pyramid, and welcome feedback at this stage.

There are currently no comments.